A special interactive HDADD Information Compliant Entertainment Appliance will be installed at Le Cube, Paris, from Feb through July. The opening is Jan 31, and if you can make it, please stop by. More information about the museum and show are here

I’m honored to been selected to be in this show, and I look forward to meeting some of the other fantastic artists who have created such incredible work.

For this exhibition, I have encapsulated a variety of new and old video video work into an interactive jukebox, so there is a lot of material in this piece. Thanks to everyone who helped, and I hope the work is enjoyed by all.

Two photos of Chico MacMurtrie‘s inflatable Birds sculpture at the Andrew Edlin Gallery in New York City. This is a beautiful piece, which consists of 16 inflatable robotic devices. I spent a few days programming this piece for Chico in the gallery, and we snapped these images on Chico’s iPhone.

I’m very impressed with the direction of Chico’s new work, which has been getting a good deal of press attention lately, too. It’s nice to see Chico’s work getting the attention I think it deserves.

If you are in the city, I recommend a trip to one of the pieces he has up now.

I’ve been playing with a game controller VJ interface for about a year, so I polished it up and used it live for this year’s Optronica show. Worked like a charm – fast, stable, and easy to use.

I’ve shown this to a variety of people, and I think it’s a great interface. Addictive and fun. No learning curve. And I’ve been user testing it with kids to make sure it works right.

This interface was made with Max/MSP/Jitter, and the hi object, and I’m running it on a MacBook Pro. It uses full res dv files and can scratch, jump, loop, and do real time effects. I have tried to build it to suit the real world needs of VJ’s. It also uses a standard usb game controller. The one I used for the show cost $10.

Below is an simple diagram of the button configuration. I went through a variety of configurations before deciding on this one.

Found a directory full of nice pictures from the 2000 Amorphic Robot Works shows at Muffattehalle in Munich.

The image above is Mark 9 and myself setting up show controls. 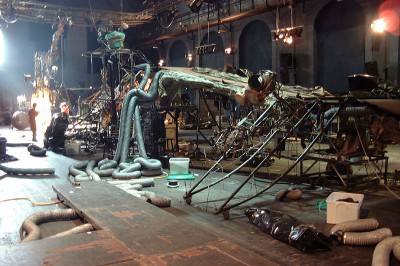 From the 1996 Amoprhic Robot Works shows at the Circulo de las Bellas Artes in Madrid, Spain.

The first video sampler. I created VuJak with Max (from Opcode at the time, now Max/MSP) with Lisa Eisenpresser and Jay Haynes. Much fun followed.

I have many hours of video material which I will try and post in the next year or so. There are lots of good stories, too, so I will update this from time to time.

There is a VuJak wikipedia page.

This is a music video I made shortly after Jitter was released in 2002. I had used music which was created by Josh Clayton, so I sent him a copy, and he smiled on the piece. Thanks again, Josh.

It was shown at the Raindance Film Festival in England in 2004.