Magritte, a film by Mark Blank, performed by Calvin Thomas & The Special Touch with Mike Oatman. 1984. In the spring of 1987, a group of friends and i created a mural for the RISD Tap Room. This was entirely created with spraypaint and stencil.

I don’t remember everyone who worked on this, but I do remember that Alexandra Rohleder, Nicole Eisenman, Josh Pearson and Ben Carlson were involved.

This was a beautiful piece, and it remained up for 17 years. I believe that the school left a piece of it remaining when they refinished the tap room 2 years ago.

Good for the soul, bad for the lungs. 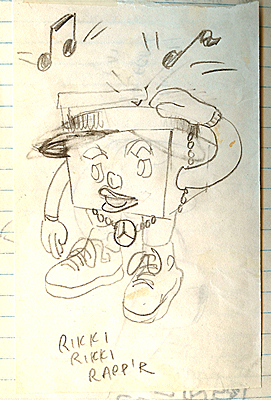 Found in the moldy old noteboks from the 80′s. Here’s a sketch I did one day for a kid’s toy concept. Rikki Rikki Rapp’r.

Idea was to have a physical scratching device inside a bright colored plastic housing – kid safe 2 years old and up. Sort of like the way we used to put baseball cards on our bike wheels to make a clicking sound. There’s a dirth of “hip hop” toys out there now, but this seemed pretty silly back in 1988. Now it’s mainstream.

This was an early website – very web 1.0. Instant Classics started its life as a book, but we decided to publish it instead on this new “world wide web” thing. We’ve gotten lots of great compliments on IC through the years, and it was Yahoo site of the day or some such thing way back.

Some great content, though, from people including Mark Mothersbaugh and Arthur C. Clarke. 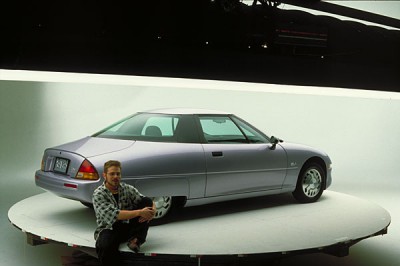 This is an initial rendering of a Tazmanian Devil VJ Station which we concepted for Warner Brothers in 1994. This was intended to be an in-store device. I dont think this ever went anywhere, but we may have just been 10 – 15 years ahead of our time. This would still be a fun device …

Here are two images of Michael Oatman from our first taping of The Leisure Channel in 1987. Mike is amazing. And boy, I think we were just way too ahead of our time. Everything we thought was funny then has come true ….

Here are three of our original EBN images from 1991. These were created for the first Lollapalooza tour. During the tour, we sold the t-shirts and vhs tapes (what’s vhs dad?). And we “toured” in the EBV (emergency broadcast vehicle), shown here. Interestingly, I made the t-shirts with Shepard Fairey of Obey/Giant fame. We made them at his studio in Fall River. 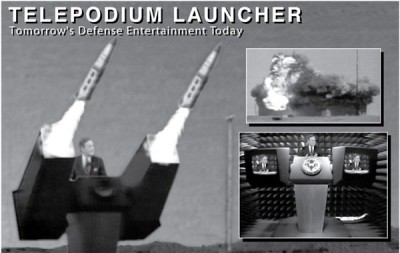 Here’s a copy of the original EBN poster which I created way back in 1990. This highlighted the Telepodium Launcher (TPL), which was built by Gardner Post and Josh Pearson. This was created for a local show, and unfortunately I don’t remember what it was. If anyone remembers, let me know. There was an extra layer of text on top of this image, but I can no longer open the original quark file on this. 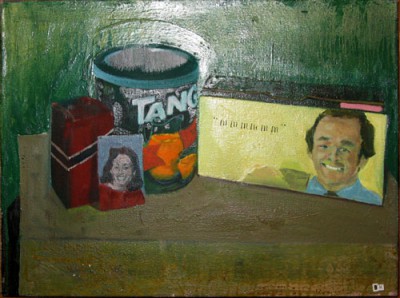 Here’s a fairly shitty painting I did back in 1986 while at RISD. Well, it’s not that shitty. Ok, it is. But shitty in a good way. I like it. This was sent to me by my friend Mark Blank, who has kept it all these years. That’s a high school picture of his wife Robin in the painting.

Here’s a pic that my friend Mark Blank sent me recently from 1985 – back in the RISD days.